The souk has every kind of fresh and tasty food imaginable, as well as coffee, tea, sweets and condiments. 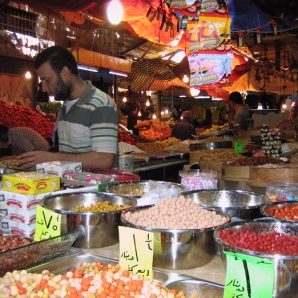 Mohammad sells stencil tessellation kits on the sidewalk. I bought a couple of kits from him the other day, he makes creating them look very easy. I’m still trying to figure out how to make my stencils look even remotely like his. I gave one of the kits to Khalid (the Syrian boy visiting Yosef the barber). I’m quite sure Khalid will be able to teach me how to use my stencil tessellations in a few days. Khalid and I communicate very well, despite neither of us understanding a word the other one says. Well-meaning translators occasionally interrupt our chain of communication and, sadly when that happens, our great communication withers away until the translator disappears.

I now know four words in Arabic: shu-kran (thank you), mar-ha-ban (hello), jay-ed (good), and mum-taaz (excellent). I emailed my fake-adopted Palestinian brother, from twenty years ago, who lives in a refugee camp in Palestine and told him about my newly-acquired language skills. He emailed back, “My clever sister!”

Today Hanan, the artist, came over again with her daughter Amira, this time to work on the Seven Women’s House Keys canvas.

Hanan brought her personal collection of embroidered yokes from Palestinian dresses and very generously donated them for appliquéd sections on the canvas.

Hanan’s family house is in Jerusalem. When Hanan was twenty-two her mother taught her how to embroider a dress with the Jerusalem design. It is pictured on Hanan in the following photograph:

The city of Amman didn’t have street signs until a couple of years ago. When taking a taxi the directions normally do not include the street name or a property number, rather they include the name of the district and a specific mosque, church or large building near the destination. I just say “Weibdah, Paris Circle.” And, after being dropped off in front of Stop and Shop, I walk home.

My landlord, Imad Petro, is very excited about my project. Without any prodding, he asked if he could search through the shops in Downtown Amman to find seven house keys. His family’s house is in Bethlehem.  Imad, and his brother Samil, brought over seven house keys that Hanan quickly rejected, saying they were too large.

He then returned the keys and brought seven more back, as well as some Palestinian-embroidered coasters that can be cut up and appliquéd on the canvas. 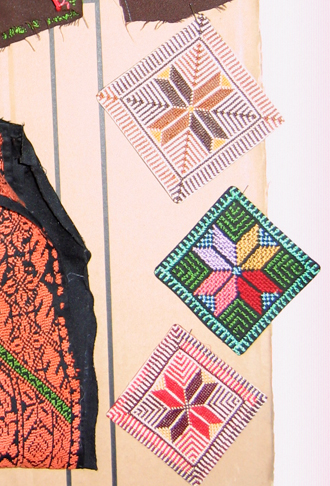