Since moving into my apartment, I’ve been working on the Seven Women’s House Keys canvas daily, about 10-12 hours per day. My concern throughout the creation of this canvas has been not having enough time to complete it before the exhibition date, January 8th.

Hanan has visited weekly and usually brings one of her daughters with her. Her daughter Haneen is a nurse in the military. On one of her days off from work, Haneen came with Hanan to sew beads on the canvas. Prior to coming to Jordan, I spent the previous year designing, painting and sewing the border of the canvas. The border includes the names of all of the Palestinian refugee camps in Syria, Palestine, Lebanon and Jordan written in Arabic–a total of 246 camps. Haneen randomly selected a section of the border to bead. After about an hour of beading Haneen exclaimed with surprise: “I just realized, I am beading the name of my camp!” I replied, “This is definitely a sign that you are in the right place at the right time!”

Haneen’s “sign” that she’s in the right place, and similar “signs” that others have told me in relation to this project, help me to remember my reason for being here: to create a canvas that incorporates embroidery from various Palestinian villages. The purpose of the completed canvas is to visually integrate fragments of Palestinian heritage (symbolized by the embroidery patterns) and their direct relationship to the ownership of land and homes in Palestine.

One evening Dayala, Hanan’s neice, came over to bead. While we were beading we talked about the fact that many Palestinians in Jordan still have the deeds to their homes and land in Palestine. I decided it would be a good idea to incorporate a copy of a deed printed on cotton into the canvas. Dayala volunteered to copy her father’s deed on cotton. She reappeared the following week with the deed on cotton. The only problem was that the deed was printed as a decal on fabric, which caused a sheen to the fabric. Hanan sanded the decal but, even with sanding, the fabric retained a sheen and was incongruent with the embroidery appliqués on the canvas.

Many Palestinians were forced from their homes in the middle of the night and left with only the key to their front door. They were told they could return to their homes in a week or two. Many of the older women living in Jordan still wear their house key on a chain around their neck underneath their clothing.

I chose to come to Jordan because there are millions of dispossessed Palestinians here, many of whom were born here. I’ve found that the younger generation (35 years old or younger) are not educated about their history and unaware of the current events in Palestine. Association with Palestinian identity in Jordan means exclusion from government jobs, equating to an exclusion from economic advancement. In general, advancement requires establishing Jordanian identity, primarily through marriage (children acquire their father’s last name, the wife keeps her maiden name). It is a very complicated issue, but suffice it to say, the younger generation’s lack of interest in their “lot in life” is disconcerting. Palestine is so close, yet so far away. The lights of Palestine are visible from the coast of the Dead Sea, a two hour drive from Amman.

My original intent was to meet with seven Palestinian women on a regular basis and have them assist in creating the canvas.

Not long after arriving in Jordan, I was referred by a friend to a man who–I was told–had ties with embroiderers in Amman. I met only twice with the group of women this man selected, in my apartment. I disbanded this group after being informed he was mismanaging the funds and the project. I removed the work the women did on the canvas and started again from scratch.

I then established a new group of women with the help of Hanan Khalidi, the artist I met immediately after arriving in Jordan. I included one woman from the original group, Majedah (see earlier post), and five women embroiderers recommended by Hanan. My time for working on the canvas was shortened by over a month, therefore, the role of the women embroiderers changed from actual work on the canvas to meeting twice for a salon at which time they beaded and embroidered sections of the canvas and shared their ‘stories” of how they ended up in Jordan. 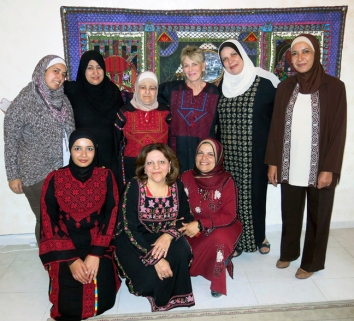 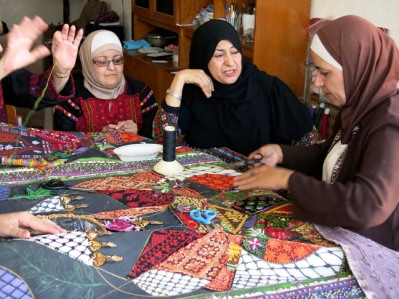 Their “stories” have been my inspiration while working on this canvas. The pillars of the salon participants have been Hanan (with occasional visits from her female family members), Majedah and myself.

The biggest contributor to the canvas has been Hanan. She donated her collection of yokes of women’s dresses that she and her sisters embroidered over the years to use as appliqués on the canvas. Without Hanan’s artistic and embroidery contributions the canvas could not exist.

Hanan spent numerous hours building up the impasto on her painting of Jerusalem, the central image on the canvas, and crocheting around it.

Hanan showed up weekly with additional contemporary embroidery appliqués that she created inbetween our meetings (the olive branches, the central diamond shape on the pitcher and some other embroidery). She usually arrived with her daughter Amira and at least one other daughter to assist with sewing seed beads on the names of the Palestinian refugee camps written around the border.

Amira and I usually spent our salon time working together on details and transactions (phone calls) pertaining to the exhibition and scheduling meetings.

Hanan demonstrated the way to create Palestinian embroidery, by transferring a cross hatch pattern on paper to fabric, the stitching technique and removal of the threads.

Majedah also participated in our group meetings. Majedah’s family home is in Gaza and she contributed several appliqués representative of Gaza and the yards of embroidered trim for the border of the canvas.

Majedah and Hanan sewing and cutting 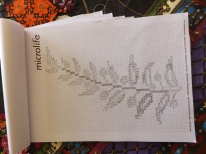 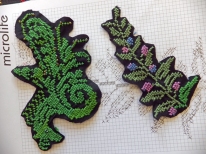 During my last meeting with Majedah, Hanan and her two daughters Rasha and Amira, we labeled the sections of embroidery appliqués with the names of their respective village.

We also played around, wearing the wedding hat:

At one point, when the canvas was nearly completed, the man whom I had originally employed to find the women embroiderers threatened to sue for stealing intellectual property and actually made claims that the project was his idea. His claims were beyond ridiculous and would never hold up in court, but to avoid further association I tore off the two appliqués that were originally purchased (with my money) to be used on the canvas. After the appliqués were removed, the composition of the canvas needed to be changed, which was at first disconcerting. I personally learned through this experience that our calamity is our providence. To tie the composition together I needed large areas of embroidered appliqués. Soon after I first arrived in Amman, I purchased a truly beautiful hand-embroidered Palestinian dress with red and black threads. I was looking forward to wearing it to the upcoming Fulbright Thanksgiving dinner but, alas, I cut it up to use on the canvas. Now the canvas, through my eyes, finally says what i want it to. The central painting of Jerusalem is surrounded by appliqués from the dress that speak to the Dome of the Rock in Jerusalem and minarets.

The energy and intellect of many people contributed to the creation of the canvas: their stories about Palestine, their knowledge and first hand experience, and their thoughts while sewing, all contributed to a gorgeous, historic collection of embroidery that captures the beauty and memories of life in Palestine.

The following are photos of the continually changing canvas:

1 thought on “Women with Keys”