Tonight I am hosting a film event at Young Eyes Gallery. It’s actually a thank you celebration for the people who contributed to my projects in Jordan and to honor Palestine. Amira and I picked up the “Seven Women’s House Keys” canvas from Gallery 14 yesterday. The canvas will be the focal point of the event tonight.

One shop I failed to mention is the Smoke Shop just off of Paris Circle. The smoke shops are worth seeing, even for those who don’t smoke. I went by there today and took some photos. 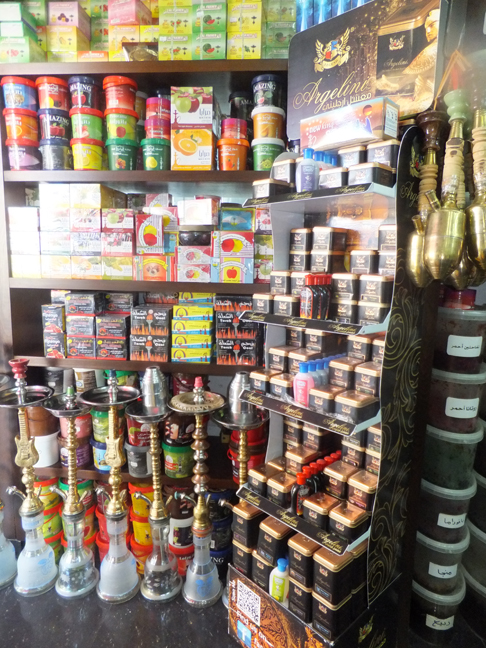 On my walk back to my apartment I thought about how accustomed I’ve become to saying hello to familiar and unfamiliar passerby’s while walking to and from Paris Circle. The people I’ve come to know here remind me of a young man from Russia I met years ago in the Sinai Desert. He owned literally nothing and his job as a garbage collector paid three dollars a day. He invited me to his apartment for dinner. After entering his apartment he presented me with a gift of a scarf his mother made, asked me to sit down and served me a plate filled with chicken and a fork. I asked if he was going to eat and he replied, “I’m not  hungry. Please eat.” Before leaving his apartment I glanced into his kitchen. There was nothing in the kitchen except a pot with a partially cooked chicken boiling on a hotplate . I was using the one plate and fork that he owned. When I said goodbye I told him how exceptionally kind he was. He replied, “No, I am not exceptionally kind. I am a human being. This is how human beings treat other human beings. Anything less is not being a human being.”

In two days I’ll be on a plane flying to the United States.  My experience in Jordan can be compared to a little spot on this earth brimming over with real human beings.